Then post that list, with your commentary, to your journal. Other people can get lists from you, and the meme merrily perpetuates itself, hopefully for the rest of eternity!

Worldbuilding is writing. No matter what time period you're in, what setting, what people, your story exists within a world, and the story builds that world within your reader's mind.
END_OF_DOCUMENT_TOKEN_TO_BE_REPLACED

This is the post I have been waiting for. Marie Brennan, in a guest post on Jim Hine's journal, encapsulated beautifully so many of the things I have wrestled with about my own fiction recently. My good friend, Rabia, asked me to write a post for her a while back that ended up being about flash fiction, but it was supposed to be about writing myth.

END_OF_DOCUMENT_TOKEN_TO_BE_REPLACED

The idea here is to have each storyworld recognizable for what it is, but also to have each collection look different than an individual short story.

END_OF_DOCUMENT_TOKEN_TO_BE_REPLACED

I am seriously considering (drafting) a Kickstarter project to help pay to get digital (and printed) editions of Soul (Breath), Radiance (Radiant Lands), and Gone Hunting (Vardin) to be gorgeous, properly covered, and properly copywritten.

And then, I actually come up with a cover I think I like. But will my audience like it? 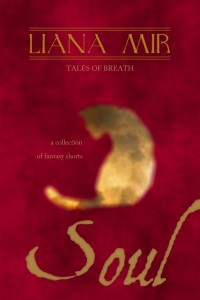 • "Crossing the Barrier" is on submission. I haven't heard back about the art yet, so everything's still pending.

I have not posted a new update on Summerlight yet because it's a structural book and I just saw the big picture last week, which means I've been spending this week sketching out the ending and some key points throughout. I do hope to settle back soon into a chronological groove with the writing, but I won't be posting anything until the next part is written and betaed.

• I have a few other shorts on the back burner and a couple of I'm-not-sure-how-longs. I'm not focusing on drafting them at this time. I figure the novel is quite suffiicient to keep me.

So this universe has given me its overall arc a whole lot better than any other storyworld to date. It has a pretty complex history and power system, with the powers themselves being rooted in another dimension and with a rather different set of possiblities being accepted and/or used at different times in history.

What makes this storyworld so particularly interesting to me is that it's the first time where I have a clearly fantasy premise rooted in an intensely "Christian" worldview. By "Christian," I mean that this is a rather secular empire that uses the Bible and its carefully manufactured interpretation thereof to control a worldwide populace, as well as several outlying space colonies.

• Several shorts are in progress, though I'm not completely happy with any of them yet, thus the slow work. Getting the voice right is tricky. We have "Eye of the Mirror," "The Silver," and Sacred Mirror, all of which are tentative titles.

• I'm certainly learning quite a bit about worldbuilding with this one. This is a world that did not arrive fully formed and refused to shape itself. Nope. It's making me do all the heavy lifting (which is kind of fun, if I'm being honest). I'm developing a Series Bible for it and counting this as writing time because I will be putting in a PDF format and keeping it for personal use.

• I have four stories completely drafted, on paper or on the computer: "Baker of Souls," "A Pretty Word," "Lost Heart," and "The Great Cat and His Soul." I'm planning on rewriting the first three with my updated worldbuilding information and better character building on the first and the third. The fourth will be heading over to my beta once it's typed.

• I have a fistful of stories I want to write in this universe: about the Fell, a girl who brought the destruction of the Old King's regime; about Shinet, the soulless, and her reluctant comrade, Covall; about the immortal empress; about the Mavren, the Collector and former enforcer; about the old doctor out in the hills with the water estate. We'll see.

• This is a world from a long time ago and a different pen name, but an unplaceable drabble has inspired me to continue it. The drabble was "City of Glass," and the next piece will be entitled the same. It's a short series of drabbles set in the Alliance universe and can now be downloaded in PDF.

Apparently, I have an inordinate love for names beginning with the letter K.

Writing anything new? Any new world sparking your interest?